A Karesansui garden in Daitoku-ji (Kyoto) 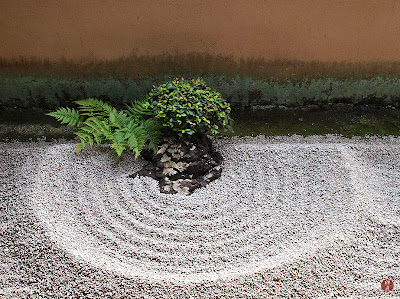 This stone belongs to the Koda-tei (the Koda River garden) of Ryugen-in of Daitoku-ji. This small and refined stone garden is composed in so-called A-un-no-niwa (the garden of alpha and omega) style.

The moss-covered stone and ground represent the waterside of the Koda River. The white gravel symbolizes the ruffled surface of this river.


The Koda River is the Chinese river which flows near the Rinzai-in (Rinzai Zen temple) which Gigen or the founder of Rinzai Zen sect established in 9th century.