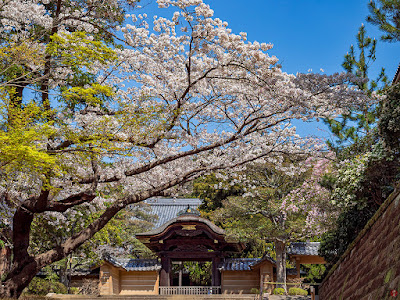 In the bright sunlight pouring from the azure sky, the pale pink flowers of Someiyoshino-zakura are in full bloom like rows of brilliant cirrocumulus clouds gently floating above the imperial envoy gate, which indicates that the height of spring has just arrived here again this year.
Someiyoshino-zakura is the most notable and popular cherry tree of Japan and is indigenous to our country. It has been planted as a cultivated variety since the end of the Edo period and the beginning of Meiji era (1868-1912).
Someiyoshino-zakura is said to have been created artificially by the hybridization of the Oshima-zakura (Prunus speciosa) and the Edhigan-zakura (Prunus pendula form. ascendens) by the gardeners and landscapers of Somei Village at that time to model after the Yoshino-zakura (Prunus yedoensis) in Mt. Yoshino.
All the Someiyoshino trees cultivated in Japan are cloned (propagated by cuttings and grafting), which is why their flowers all bloom almost at the same time and scatter simultaneously in a short time.
These cloned cherry trees are unable to make their seeds and so their flowers hardly ever give off the sweet aroma and nectar for calling insects and birds, which means that they never reproduce themselves without human intervention.
No comments: 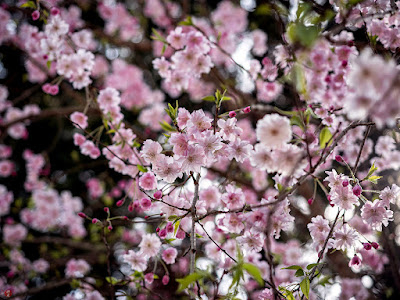 Every flower blooms beautifully, but when its short lifetime ends, it must decay and lie on the ground like displeasing debris. It is sorrowful to see this decay of a flower, because I know how graceful it was until yesterday.
For example, the pearl-white flower of Haku-mokuren (white magnolia) is magnificent and dazzling, but at the end of its brief life, its petals become sadly ugly like the dirty rubbish that has turned rusty.
The virtue of a Sakura flower is the elegance and splendor at the end of its life. Its delicate petals fall quickly like the snowflakes fluttering in the wind and retain their beauty without looking miserable until they disappear completely.
The petals that fall to the ground like fragments of snow are thin and small pieces, which are quickly decomposed into dust and never reveal their pitiful decline.
No comments: 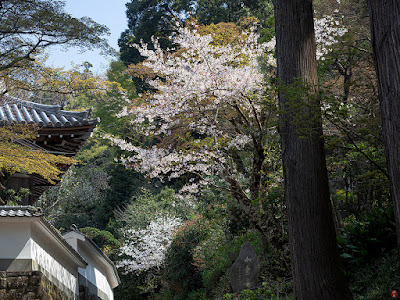 The full-blown flowers of Sakura are sparkling in the bright spring sun to decorate the quiet slope leading to the Oubai-in (the temple of winter jasmine).
The young leaves and small red flowers of maple trees, which seem to be small golden fleeces hanging in the air, are lending a touch of brilliant color to this view.
No comments: 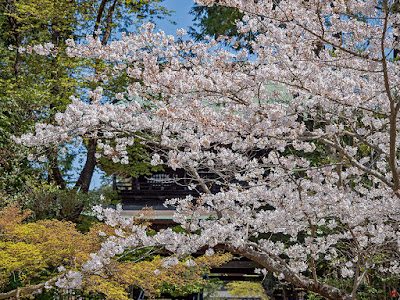 The countless white flowers of Sakura are shining in the benign spring sunlight and beautifully adorning the stone steps leading up to the Sangedatsumon (Three Gates of Liberation) as if to invite us to the heart of this old Zen temple.
Sangedatsumon symbolically consists of three "Mon" (gates) of "Gedatsu" (deliverance from worldly attachment), which must be passed through before reaching the Buddhist enlightenment.
This gate symbolizes the the three principles to attain liberation from the spiritual ignorance and darkness.
"Ku-mon" (the gate of emptiness) implies the awakening to "Ku" (all things are empty and illusory), "Muso-mon" (the gate of indiscrimination) implies the awakening to "Muso" (all things have no discriminating form), and "Mugan-mon" implies the awakening to "Mugan" (any earthy desire must be abandoned).
No comments: 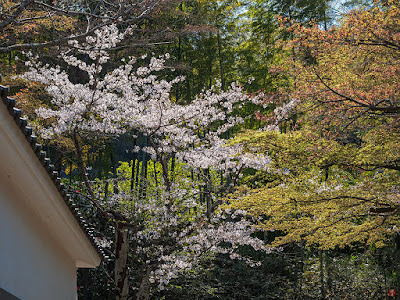 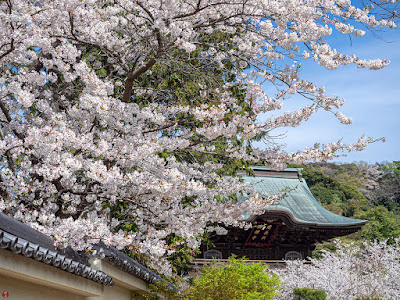 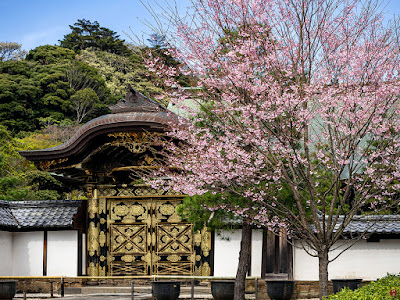 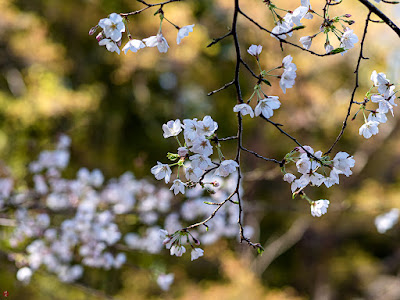 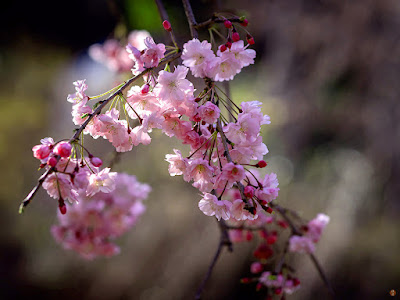 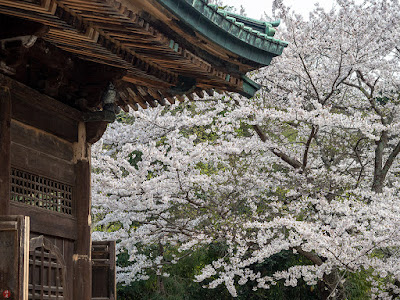 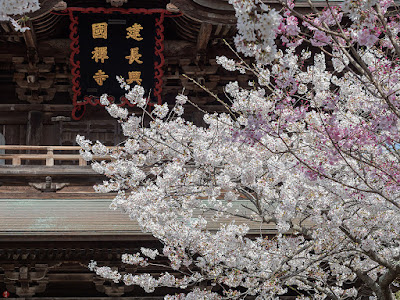 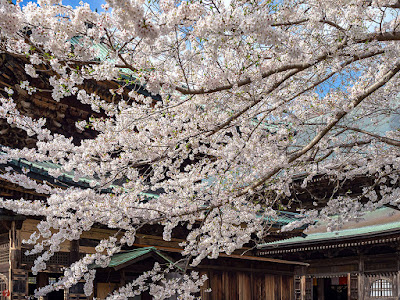 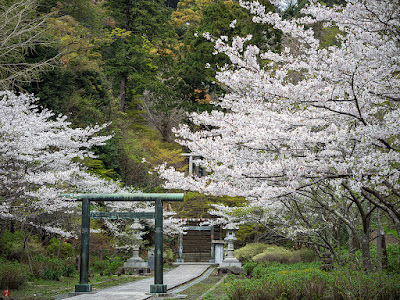 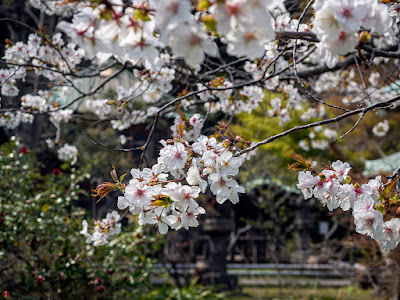 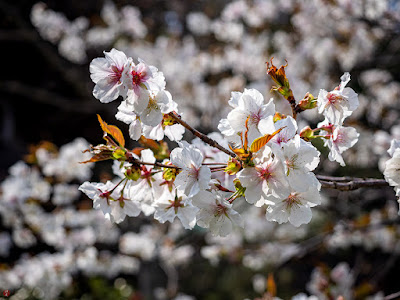 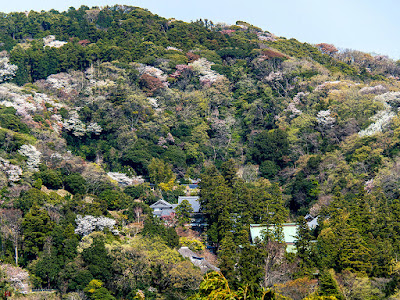 Bathed in the rich sunlight of mid-spring, the temple complex of Engaku-ji is standing still in the thickly wooded "Yato" valley, which is densely covered with fresh young leaves and white Yama-zakura flowers.
"Yato" is the valley-like landform made by the longtime erosion of the hillside and is one of the geographical features peculiar to Kamakura region.
The gradual upward arrangement of buildings from the San-mon gate to the Buddha hall and Hojo (the main hall) along the quiet valley makes the subtle and profound view which deserves the place where ascetic exercises are practiced in order to reach spiritual enlightenment.
No comments: 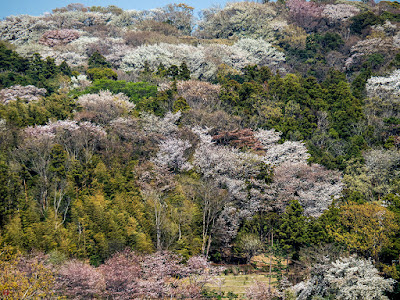 A fine pointillist picture of spring is painted on the sunny hillside with the tiny colorful dots of young leaves and Yama-zakura flowers.
Spring is the season of spectacular flowering, in which plants and trees bloom one after another to earnestly get a chance to be pollinated for their propagation.
Flowering is the colorful manifestation of the hidden life-force which is quietly stored in plants and trees. By blooming vividly, the inconspicuous and unnamed green plants and trees, that are usually overlooked and unnoticed except in the time of flowering, let us know their precious presence clearly.
Before long, a high wind of spring will suddenly cause the pale white flowers of Yama-zakura to scatter like a snowstorm and disappear like a daydream.
The hillside will transform into a glorious mosaic which is made by the pieces of greenness in various shades and tones.
No comments: 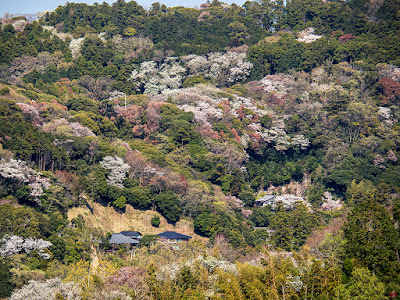 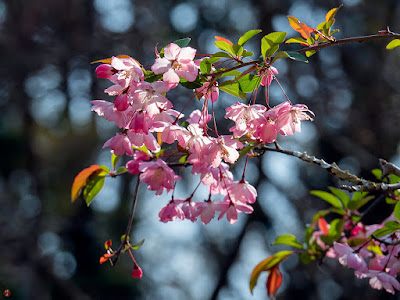 Kaido (aronia) is a small garden tree native to China, which produces numerous five-petaled, dark pink flowers in spring. The flower stalk of Kaido is slender and its elegant flower looks downward gracefully as if to be dozing off.
This flower has been praised in China since ancient times and, together with plum and peony flowers, it is considered one of the "three outstanding flowers of spring."
In China, it is also called a "sleeping flower" after Yang Guifei in the Tang Dynasty.
According to legend, when Emperor Xuanzong summoned Yang Guifei, she appeared with a tipsy and sleepy face, which let him murmur "the sleep of my beautiful Kaido flower is not enough yet." Yang Guifei herself is said to have loved the flower of Kaido.
In China, this flower has been loved along with plum and peony flowers traditionally, and is often depicted as a subject in Chinese poetry and paintings.
No comments: 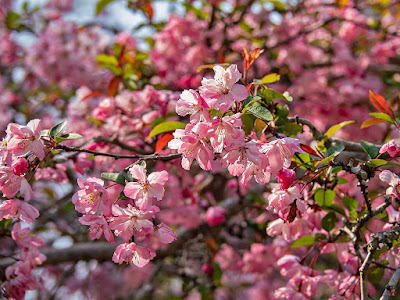 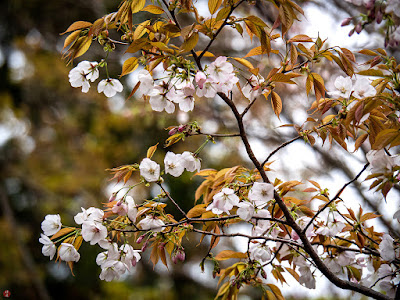 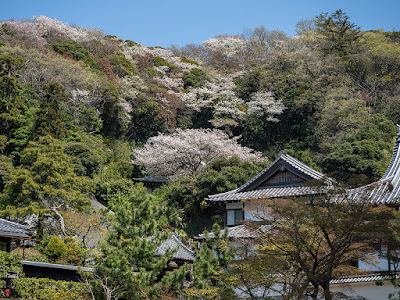 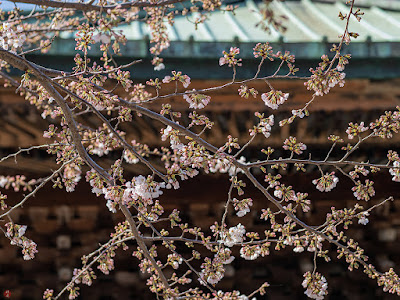 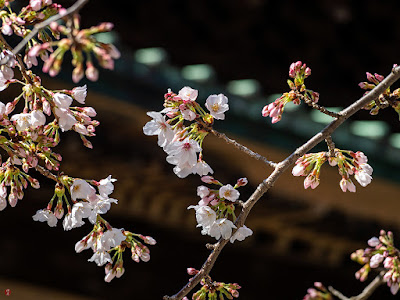 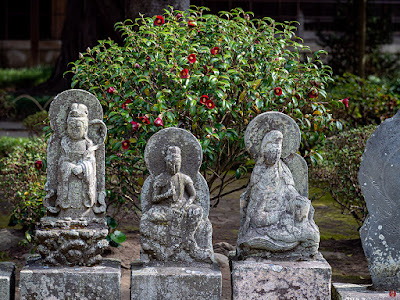 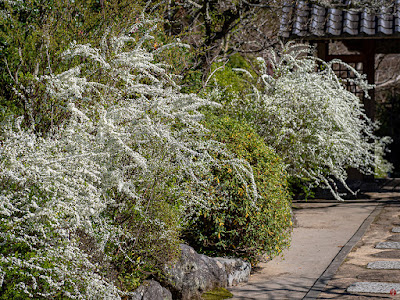 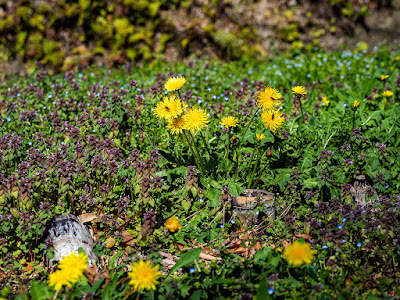 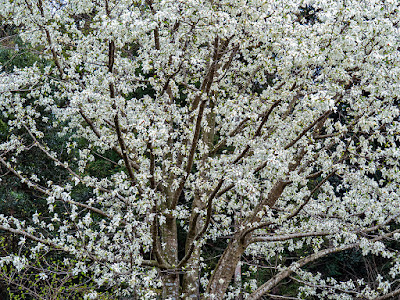 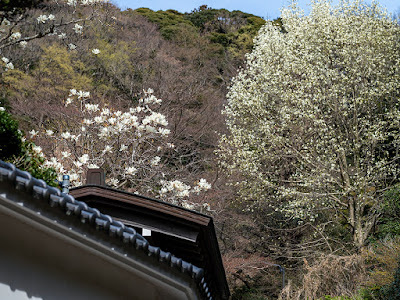