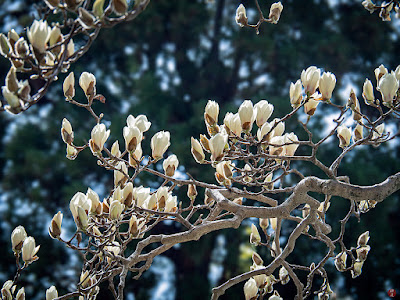 As if to indicate the evident progress of spring, the noble silky-white flowers of Haku-mokuren (white magnolia), which I have been waiting for, are beginning to bloom again this year.
It is said that this white magnolia tree was the gift presented by Chinese writer Lu Xun to this temple in 1933.
Lu Xun (1881-1936), who once stayed in Japan to study at Sendai Medical College, gifted the sapling of this tree as an expression of gratitude to a Zen monk of Engaku-ji Temple who had initiated him into Rinzai Zen in his life in Japan.
The white magnolia tree originates from China, where it is called "Gyokuran (white jade orchid tree)" and its fragrant flower is the city flower of Shanghai where Lu Xun spent the last years of his life.
The white magnolia tree grows to a height of 10 to 15 meters, and in spring, before its new leaves appear, it produces plenty of large, upward-facing white flowers which look like white lotus flowers in the air.
Email ThisBlogThis!Share to TwitterShare to FacebookShare to Pinterest
Labels: Engaku-ji, flower, haku-mokuren