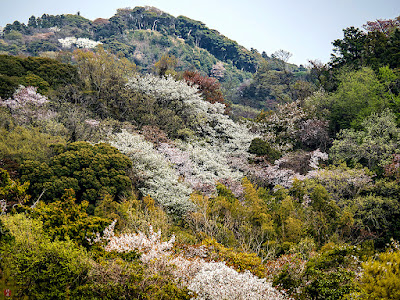 The Yama-zakura (mountain-cherry) tree is a general domestic plant variety of Japan and has been long admired by Japanese people since ancient times as the principal object of our Hanami (cherry blossom viewing) tradition.
This native cherry tree has been described in many "Waka" poems (classic Japanese lyric verse), in which its elegant and short-lived flowers are regarded as one of the essential symbols of "Mono no aware."
"Mono no aware" (the pathos of earthly things) is the most typical concept in Japanese aesthetic sense and represents our traditional emotion of finding profound beauty in transience. This sentiment is influenced by Mujo-kan (Buddhist concept of the impermanence of worldly things).
The Yama-zakura tree bears numberless snow-white or pale-pink flowers from March to April. Unlike familiar Someiyoshino (Japanese cherry) tree, its new leaves appear at almost the same time with its flowers. The basic color of the young leaves is rosy, but some leaves may be tinged with various green or yellow colors.
Email ThisBlogThis!Share to TwitterShare to FacebookShare to Pinterest
Labels: flower, kita-kamakura, yama-zakura