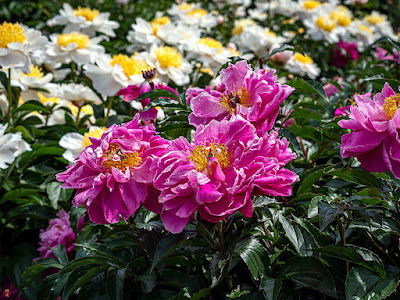 Shakuyaku (Chinese peony) was introduced to Japan in the Heian period (794-1185) as the precious medicinal plant for anti-inflammation, painkilling, hemostasis, etc.
It is said that many garden varieties of it were selectively bred during the Edo period (1603-1868). It is one of the plants whose flowers have been treasured by the Japanese as the typical spring flowers displayed in a tea room.
At the Agricultural Research Center, which was the predecessor of this botanical garden, from the end of the Meiji period (1868-1912) to the beginning of the Showa period (1926-1989), Shakuyaku varieties were studied and improved for their characteristics that would give pleasure to European customers, with the aim of exporting them to Europe where the Japonism was popular at that time.
Email ThisBlogThis!Share to TwitterShare to FacebookShare to Pinterest
Labels: flower, ofuna flower center, shakuyaku