A Bodhidharma statue in Kencho-ji temple 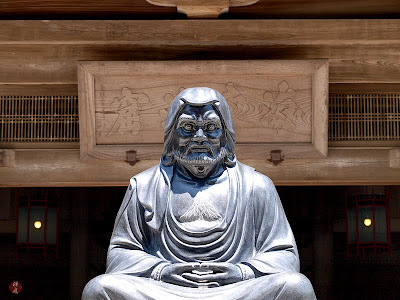 Bodhidharma is the legendary Zen master who is believed to be the founder of the Zen sect. It has been said that he was born as the prince of a kingdom of south india and spreaded the teaching of Zen Buddhism in China in the 6th century.

This newly elected statue of Bodhidharma is a gift sent to Kencho-ji temple as a token of friendship by Shaolin Monastery of China. In this Shaolin Monastery, Bodhidharma continued to sit and meditate (Zazen) before a stone wall for nine years to achieve spiritual enlightenment.

The stern and fiery expression of this Bodhidharma image appears just about to shout angrily at us ("Katsu" in Zen) so as to awaken us from spiritual darkness.
Email ThisBlogThis!Share to TwitterShare to FacebookShare to Pinterest
Labels: Bodhidharma, ke, statue