An archer in Engaku-ji temple 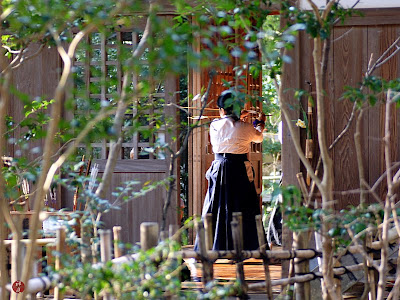 The art of Japanese archery is generally considered to have a close relationship to Japanese Zen Buddhism from the standpoint of their spiritual discipline.

On the inner wall of this "Enma (the King of Hell)" shrine, the bow left by Eugen Herrigel (1884-1955), a German professor who taught philosophy in Japan and wrote the important book titled "Zen in the Art of Archery," is displayed as a memento of his deep devotion to Japanese archery and Zen Buddhism.
Email ThisBlogThis!Share to TwitterShare to FacebookShare to Pinterest
Labels: archer, Engaku-ji