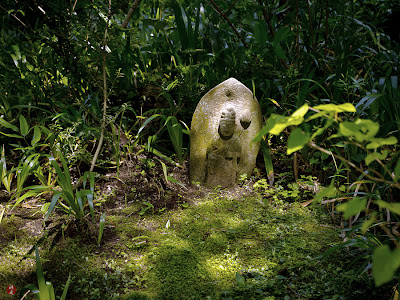 A small stone image of Shokannon in the thicket was softly illuminated by a ray of sunshine coming down through the branches of trees.

Shokannon is one of the six Kannons (the Buddhist deities of mercy) and, as a manifestation of the infinite wisdom of Buddha, rescues all living things from Hell.

In the left hand of this Kannon, a lotus flower which is beginning to open is held as the symbol of his supreme wisdom.
Email ThisBlogThis!Share to TwitterShare to FacebookShare to Pinterest
Labels: shokannon, stone image, tokei-ji