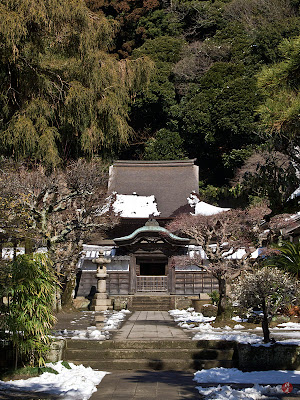 Snow is called "ten-ge" (celestial flowers) in Buddhist terminology, which means "the flowers that bloom in the celestial world." The paper flowers scattered before the Buddha's image in Buddhist rituals are also called "ten-ge."

The sudden night snow of early spring was quietly scattered like innumerable white petals on the Shari-den (the hall of Buddha's bones) to celebrate the return of the time of rebirth and growth.
Email ThisBlogThis!Share to TwitterShare to FacebookShare to Pinterest
Labels: Engaku-ji, shari-den, snow