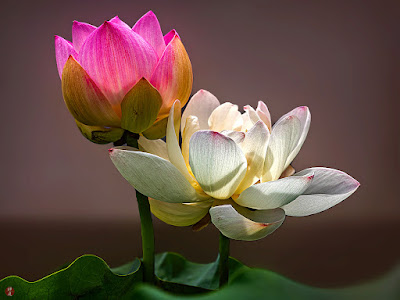 In China, the lotus flower is said to appear nobly and purely in muddy water without being soiled by mud, and so it has been called the flower of a wise man who is untainted by worldly affairs.
Since before the arrival of Buddhism in China in the 1st century, the lotus flower has been regarded as a sacred flower that is not tainted by worldly affairs. It is common to build lotus-ponds in temples, and the lotus flower has also become an essential part of ponds in Chinese-style gardens.
In China, the lotus flower viewing has been practiced since the 6th century. The lotus-viewing festival (Kanrensetsu), that is a day to celebrate the early morning blooming of lotus flowers in the height of summer, has been held by tradition.
In a full-summer day, at summer resorts, elegant persons gather to enjoy the liquor of Hekitouhai cup while admiring the beautiful lotus flowers which have just bloomed early in the morning.
The Hekitouhai is a cup made from a large lotus leaf, into which liquor is poured and drunk through a cut opening in the stem of the leaf that looks like an elephant's nose. This lotus leaf cup is also called a Zoubihai (elephant's nose cup) because of its shape.
It is said that the participants of the festival composed the songs and poems about their admiration and adoration for lotus flowers while watching the dewdrops of liquor rolling on the leaf.
This elegant Chinese celebration was introduced to Japan by Japanese scholars of Chinese classics in the Edo period (1603-1867), and it is said that the first lotus-viewing festival was held at Shinobazunoike Pond in Ueno, which was one of the most famous viewing spots of lotus flowers in the city of Edo.
Email ThisBlogThis!Share to TwitterShare to FacebookShare to Pinterest
Labels: flower, ofuna flower center, sacred lotus