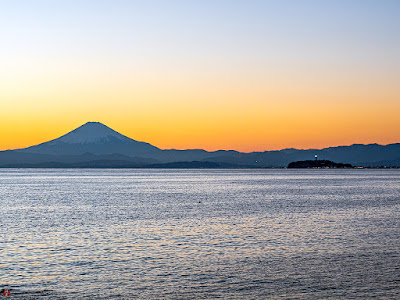 In the vivid cinnabar afterglow beyond the shadow of the distant peninsula, the snow-topped figure of Mt. Fuji is emerging dignifiedly from the horizon like the legendary Mt. Sumeru (Mt. Shumisen), which is considered in Buddhism as the highest mountain rising in the center of the universe.
There is no cloud in the cold windy sky. The sunken sun, which has disappeared behind the peninsula, still continues to cast rich golden brilliance into the air, tinting the gray-blue sky in various shades.
The surface of Sagami Bay, which is rough with small waves, is faintly reflecting the twilight left by the sun. The gleam of the light house on Enoshima Island can be seen, and the darkness is gradually deepening.
Email ThisBlogThis!Share to TwitterShare to FacebookShare to Pinterest
Labels: morito-beach, seascpe, winter