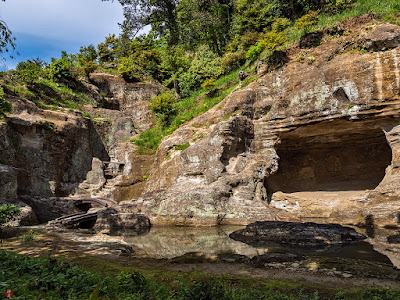 The stone cave named "Ten-nyo do" (the cave of the goddess of mercy) is carved in a large rock in the northern corner of the temple grounds.
This cave was made as a place for "Suigetsu-kan" (water and moon viewing meditation), which is one of the typical ascetic practices of Rinzai-Zen school.
A pond named "Choseichi" (the pond of pure water) was dug in front of this cave. The center of the pond was formed as an island. On the left side of the pond, there are a waterfall basin, a waterfall-divider stone, and a vertical rock wall which works as an artificial waterfall of stored rain water.
There are two small wooden bridges, which lead to the mountain path to the humble hut named "Ichiran-tei" (the sightseeing arbor) above the pond.
This subtle and profound "Iwa-niwa" (rock garden) is said to be the initial archetype of Zen gardens of Japan and was originally landscaped by Muso Soseki. He was a renowned Zen priest of the Rinzai sect, a garden designer, and a poet, who lived from the end of the Kamakura period to the early Muromachi period (1275―1351).
Email ThisBlogThis!Share to TwitterShare to FacebookShare to Pinterest
Labels: garden, Zuisen-ji