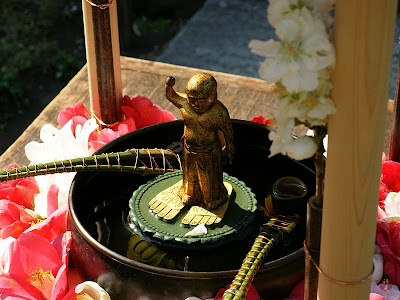 The 8th day of April is traditionally considered to be Buddha's Birthday by the Buddhists of Japan. On this day, in order to cerebrate this sacred birthday, every Buddhist temple in Japan holds "Kanbutsue" (bathing Buddha festival) which is also known as "Hana-matsuri" (flower festival).

A basin filled with sweet tea is placed in a small wooden altar beautifully decorated with various flowers. The tiny statue of newborn Buddha stands in the center of this basin.

The altar symbolizes the Lumbini village which is the birthplace of Buddha. The sweet tea represents the blessed rain which the nine sacred dragons of heaven sent to Buddha for bathing him.

The small ladles put in the basin are used by priests and worshipers to ladle up the sweet tea and to bathe the newborn baby in celebration of his birth at the ceremony.
Email ThisBlogThis!Share to TwitterShare to FacebookShare to Pinterest
Labels: buddha, hanamatsuri, tokei-ji