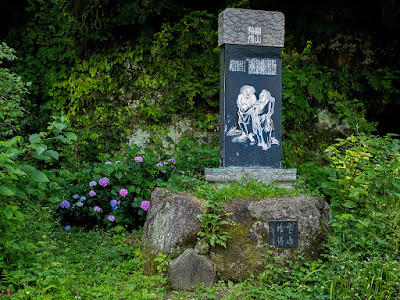 By the side of the stone monument on which "Kanzan Jittoku-zu" (the picture of Kanzan and Jittoku) is engraved, the magenta and blue flowers of Ajisai were quietly blooming in the shade of trees, waiting for the next rain.

This stone monument was given to Kencho-ji temple by Kanzan-ji Temple (Han-shan-si, Suzhou, China) as a token of the cultural exchange of Rinzai Zen Sect between China and Japan and is a replica of the original monument of Kanzan-ji temple of China.

Kanzan and Jittoku are legendary Chinese Zen-monks who are often drawn as a subject of Zenga (Zen Buddhist paintings) in China and Japan.

Standing alone in the silent grove behind the temple, I felt like I was hearing the roars of laughter from these eccentric Zen-monks, which were vibrating through eternity.