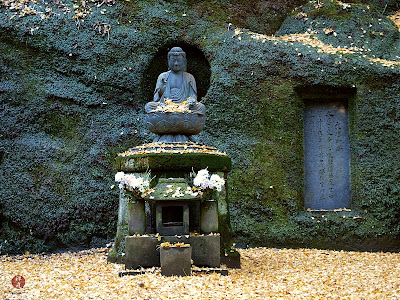 A Shaka-nyorai statue is serenely sitting in the eternal silence of enlightenment. The ground and rock around this statue are beautifully covered over with the vivid yellow fallen leaves of ginkgo trees.

In the small hollow of the mossed rock behind this Buddha statue, the gravestone of Soyen Shaku (1859-1919) is secretly enshrined.

Soyen Shaku was one of the most excellent zen masters of Rinzai school and the chief administrator of the Kencho-ji sect at that time. He was the first zen teacher to introduce Zen Buddhism into the United States.

D.T.Suzuki, who is also buried in the graveyard of Tokei-ji, is one of the prominent disciples of this great mentor of zen.
Email ThisBlogThis!Share to TwitterShare to FacebookShare to Pinterest
Labels: shaka-nyorai, Soyen Shaku, tokei-ji